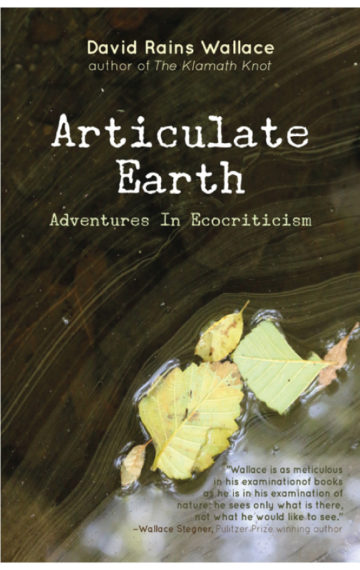 Articulate Earth is a collection of 23 provocative essays spanning the past 30 years of Wallace’s career. Through meticulous research and hands-on experience, he explores American culture’s relationship with nature—particularly that of the West—in its literary, scientific, and political dimensions.

“It takes some imagination to see everything that exists as a living fossil, or to find the remote past wriggling energetically underfoot: Wallace uses his to to make the reader recognize evolution as what is happening rather than what has happened.” −Atlantic Monthly Magazine

“If Wallace’s name is less familiar to the general reader than that of other naturalists, it may have to do, oddly enough, with the very strengths of his writing. His work displays an independence of mind which remains as wary of environmentalist cant or eco-theology as of overzealous developers or clear-cut loggers… Wallace’s willingness to take risks in exploring ‘new ways of connecting,’ new ways of communicating his own ‘deep vision’ of nature, stands as testimony to the creative improbabilities he so admires in the natural world. The elegance and mythic insight of his work have already earned it a place of lasting importance in American nature writing.”
−Michael Kowalewski, Carleton College